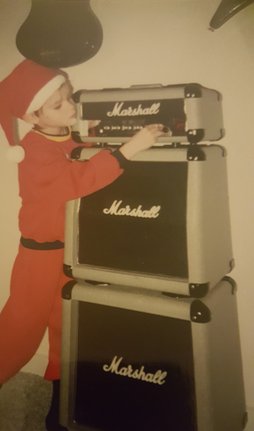 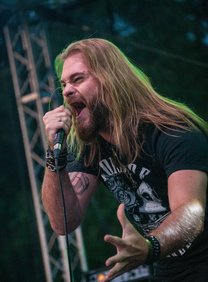 HOW IT ALL STARTED

When Nicklas was 8 years old, his parents took him to an Alice Cooper show, at an outside venue called 10'øren.
Mid show, Alice Cooper's drummer started tapping on his kick drum while rolling on his snare, leading into a drum solo. In complete awe, Nicklas couldn't get his eyes and ears off of the drummer, going crazy on the drumset. The drum solo ended and Nicklas's favorite Alice Cooper song started, which made everything even more amazing to him, it was the song 'Lost in America'.

Nicklas started getting drum lessons shortly after, and 2 years on from there,

and is the only instrument, Nicklas has ever had lessons in. While his drum lessons

went on, Nicklas started noodling around on the guitar. He had his dads old guitar

hanging on his wall in his room, and an old mini Marshall he could plug into.

Everything sounded horrible. His dad helped him learn very basic things, as his dad

was a singer, and not a guitar player, but songs like 'Smoke on the Water' was taught,

amongst some cool Wasted riffs, from his dads own band. With time, Nicklas interest

in guitar developed more and more, and he began trying to listen and learn songs he

loved, such as Metallica's 'Enter Sandman', 'Sad but True' and Judas Priest's

'Breaking the Law' and Gary Moore's 'Still got the Blues'. There wasn't any

Youtube at that time, so at the same time, it was an important training of the ears.
While practicing guitar daily, wanting to become better and better, Nicklas also began

playing around with the Playstation 2 game 'MTV Music Generator', which let you both

create music with loops, but also one note at a time, with a selected instrument.
A lot of songs was created here, mostly covers, as good as the early skilles allowed.

One of the songs created was the for example the Motley Crüe song 'Red Hot',

and a trance song from the game 'Gran Turismo 2' that can be heard during replays.

This went on for years, and Nicklas honed his skilles more and more, both on the production and composing side, and on the guitar playing side. When Nicklas was 14, he spent most his time playing video games and playing guitar along to whole Metallica albums, both the Black Album, Live shit, Cunning Stunts, and also to the live St. Anger DVD from the studio.
During Nicklas 14th year, he met with current bandmate in Defecto, Frederik Møller. Frederik introduces Nicklas to the band Dream Theater, and that's where his playing really took off, as Dream Theater was complicated on a whole other level than Metallica and the other old school bands, he had played along to up until then. Nicklas also learned about guitar tabs, and began learning Dream Theater songs, the first ones being from their album 'Train of Thought'.
When Nicklas turned 16, he started on a high school in the other end of the country. Having a hard time in schools during his youth, and at home with divorced parents, this was an important change of scenery for Nicklas to grow and focus even more on music.
Nicklas first  band was together with some of his friends from the high school. They made classic rock, and couldn't find a singer. Nicklas decided to try and take matters into his own hands, and tried to sing on some of the songs. It sounded terrible, but as the stubborn "don't-tell-me-I-can't-do-it type', he sang and sang, and challenged himself hard. The band had 2 live shows together before splitting up, one at Bifrost Bar in Silkeborg, and the other at Dragør Musikfestival.

with a lot of odd-groupings and experimental arrangements, and was soon after contacted by

Jan Langhoff, producer of Aqua and more. Jan Langhoff was going to make a record label

together with the legendary producer, Flemming Rasmussen, (metallica) and wanted

Nicklas to be an artist on the label, if he could convert his experimental and progressive

long songs, to shorter songs so they would fair better on radio etc.
Nicklas created the song 'Excluded' shortly after, which was the first song, of his new life in the

genre he's known for - progressive metal, but with his own twist - the classical instruments and

Since then, Nicklas has created and composed many, many songs, experimenting, trying new things, developing his guitar and vocal technique, always aiming to become the best of the best, which is something he to this day still aims for.

Nicklas has been a part of many projects throughout his carreer, which began for real, when Defecto was created in late 2010, with his guitar companion, Frederik Møller:
Defecto, Malrun, Evil Masquerade, Theory, Hank Shermann, One Machine, Waving Memories, Section A, Metallica Jam, Wasted, Omvendt Korstog and now his own self-titled project too.

3 nightliner tours, 5 self-transporting tours
This including opening for 'Fozzy', 'Persefone'.
1 tour in Japan with 5 shows.

Order a vinyl of 'Resonance': orders@nicklassonne.com